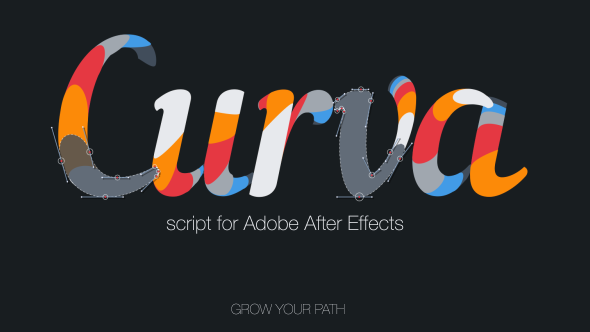 Curva is AE script to create a smooth animations of growth a paths based on Bezier algorithms.
You just select the last two vertices on the Path object in a Shape layer and then the script does everything for you.
Perfect for animating the appearance of letters, floral shapes and other such vector objects.

My job motion-designer is forcing me to write a scripts. And I’d rather spend the time to create the code, rather than a routine. Now Curva help me and you to save a lot of time and I will see to it that it worked as it should.

Curva has two separate versions of the script.
Script UI Panel version and Regular script to launch the main window at once.

Animation appearance of shapes with just a few clicks.
Adjust the type of animation by curve, as well as in native Graph Editor.
Select a template type animation (linear, ease, ease-in, ease-in-out, ease-out).
Comfortable and pleasant interface.
Save a lot of time.

We do not host any link download on downloadAE. downloadAE.net is absolutely legal and contains only links to other third party sites like Youtube, Uptobox, Mediafire, Google, Picasaweb, Dailymotion, Nitroflare, Openload, Userscloud. downloadAE.net is not responsible for the compliance, copyright, legality, decency, or any other aspect of the content of other linked sites. If you have any legal issues please contact the appropriate media file owners or linked hosting websites.